T.S. Eliot’s poem “Journey of the Magi” approaches the story of the birth of Christ from an unexpected angle: it offers the reader a detailed and realistic description of the journey that the Magi had to make in order to meet and worship a newborn King, followed by a shocking account of their emotions after having witnessed the event: “this Birth was hard and bitter agony for us, like Death, our death.” Traveling as such is a central theme in the entire story of Christmas – Mary and Joseph themselves went to Bethlehem and on a more figurative level the Child itself, of course, embarks on His life’s journey. Going on a journey is the start of something new, but it is also an ending, for a traveller has to leave his old, familiar life behind. All of us go on a similar journey, literally and figuratively, and we discover new things, but we lose something too: the “wiser” we get, the more the child in us is lost. “Star” is about the story of Christmas – about the miracle of the Birth of Christ, but also about the joy of new beginnings 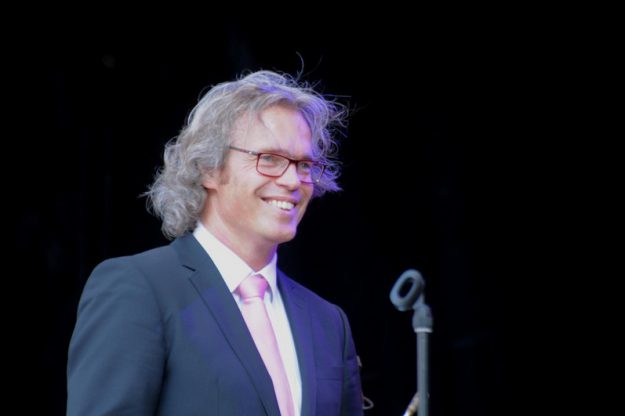 Carl Wittrock was born in Goor (in the Dutch province of Overijssel) in 1966. His musical career started off at the Goor music school, where he studied the violin and the clarinet. He then went on to attend the Conservatory in Enschede, graduating in Music Education (1990), Orchestral Conducting DM (1991) and Orchestral Conducting UM (1993) with Tajiro Iimori. He then took both national and international conducting courses with Jan Cover, Eugene Corporon, Arie van Beek and Gert Buitenhuis, among others. He has been conducting various orchestras since 1984 and also teaches music at Twickel College secondary school in Hengelo. He is currently the conductor for the Apollo Goor musical society and Twente’s youth symphony orchestra, with whom he won the national competition for youth symphony orchestras in June 2013. He was guest conductor for orchestras in Belgium, Ukraine, Switzerland, Italy, Germany, Lithuania and Bulgaria, among other countries. He began creating compositions for wind orchestras in 1985. In 1989, his work ‘Antarctica’ drew the attention of music publishers, and titles such as ‘Lord Tullamore’, ‘The Legend of Flathead Lake’ and ‘Trimbeka’ found their way to orchestras both in the Netherlands and abroad. Many composition commissions followed, such as for the Dutch Brass Band Competition, the Johan Willem Friso Royal Military Chapel, the 70th anniversary of the city of Arnhem’s liberation, the Bernischer Kantonal-Musikverband and the Dutch Institute for Wind Music. In 2013, Wittrock was charged with the honourable task of creating a composition to celebrate the 200th anniversary of the Kingdom of the Netherlands. In 2014, Carl Wittrock was knighted in the Order of Orange-Nassau. In 2014, he was awarded Overijssel province’s cultural award, and in 2015, the Buma Brass Award.